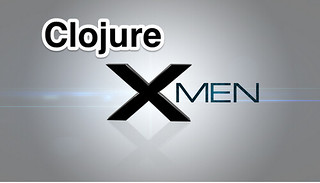 Nobody knows how it happened. Some people think it was due to the rapid expansion and adoption of Clojure. Other people say that the language itself was caused by something deeper and more magical. No one knows for sure. All that we really know is that people starting being born with extraordinary powers. Powers that no human had had before. They were strange and unique to each person they touched. The only thing that they all had in common, was that each was an aspect of the Clojure programming language.

Luke was a teenager when his powers came to him. His mother always complained that he was lazy. It was true, he did prefer to sleep until noon. He also had a habit of putting everything off to the last minute, like saving all his papers for the night before they were due. One day, though, he noticed something very strange. He could start to see the future. Well not really “see” it. But he could see the infinite possibilities of the future. Not very far into the future, but enough. It was a few milliseconds at first. But now it was up to a full second. He checked the Clojure Docs as soon as he realized his gift. It was lazy evaluation and power to deal with infinite sequences.

Spress, whose real name is Emily, came into her power early. She was only 5 years old. Her mother had taken her to a farm to visit with the animals. Her mother had pointed at the cow and told her daughter that it said “Moo”. Then, at the horse, saying “Neigh”. Spress smiled and pointed at a bucket and said “cow”. Her mother shook her head at her, but Spress only smiled bigger. She said “cow” again. Then, suddenly, the bucket went “Moo”. She was immediately taken to the Clojure X-Men school, where they identified her power as protocols. She trained her power and now is so good at solving the “expression problem”, she is known as “Spress”.

Nobody knows Multi’s background. He came to notice in his early twenties with his powers. Ordinary humans process sensory input, (like sight, touch, and sound), in an asynchronous fashion. However, when it gets processed in the brain, it runs into a single pipeline bottleneck – consciousness. Multi’s power is that he can concurrently process his higher level consciousness and reasoning to all this sensory input. The result is that he can move, think, and perform super fast and in a super smart way. He got the power of Clojure’s concurrency.

Dot always had a way with animals. She had many pets growing up. Later, she would go into the forest and the animals would seek her out. She would be found resting by a tree surrounded by deer and birds. One time, on her walk, she fell down a ditch and had her leg trapped under a log. Her mother arrived, after searching for her, to see a Bear reach down and gently remove the log. She stood dumbfounded, as her daughter thanked the bear and it nodded in reply as it turned away. She could talk with animals effortlessly. She had the power of Clojure’s Interop.

Bob is the leader of the Clojure X-Men. He seeks out people with the power of Clojure and helps train and educate them. He also is the most powerful. He can come into any argument, problem, or challenge and immediately separate out what is most important to focus on. He always knows the right thing to do, without getting bogged down in unnecessary details . His power is Clojure’s simplicity.

There might be others out there, we don’t know. We can only hope, that they are found by Bob and the Clojure X-Men and use their powers for good.